UPDATE: While using Google Maps recently to see the extent of Hurricane Harvey flooding in the area where I live, I made a startling discovery: the Scanlan Mansion is gone! The home site has been completely cleared. I presume that when I visited the site of the mansion earlier this year that the work being done was in preparation for demolition. I have no idea what the plans are for the site but I know that many people thought that the house was historically significant and that the developer of Sienna Plantation had plans to preserve it. Perhaps there are plans to rebuild it somewhere else. I’ll update this site if I find out more information. 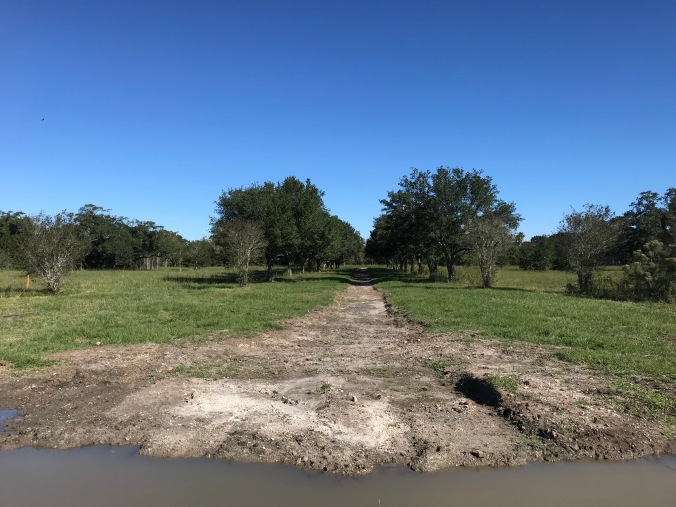 The Scanlan Mansion used to be visible at the end of these two rows of trees.

Google Maps view of the former site of the Scanlan Mansion

On a Sunday last December, I rode my bike 15 miles to reach a two mile section of gravel road. I cycled that road from end to end and back to the beginning for a total of four miles. Was it worth the 30 mile round trip? It certainly was. I was on a mission to see the Scanlan Mansion.

The Scanlan Mansion is located on Scanlan Road, a gravel road crossing private property in Fort Bend County. The road is unpaved and is gated at its eastern end (at TX 521). There’s another gate about one mile from where I entered the road at its intersection with Waters Lake Boulevard in the Sienna Plantation master-planned community. The road continues west from Waters Lake Boulevard all the way to the Brazos River (but I didn’t explore that section). Scanlan Road bisects the recently developed southern section of Sienna Plantation.

Scanlan Road near the Scanlan Mansion

The Scanlan Mansion was built in 1937 by the daughters of Thomas Howe Scanlan, who was mayor of Houston from 1870-1873. Scanlan immigrated from Ireland in 1853 and made a fortune by smuggling cotton through Mexico. He used his wealth to invest in real estate in Houston and Galveston. Scanlan was a consequential mayor who worked to eliminate corruption and champion the cause of the freedmen. He appointed blacks to the police force, the board of city alderman and he supported the candidacies of blacks running for city council. He died in 1906 and left his multi-million dollar estate of real estate and oil properties to his seven daughters.

The view of the mansion from Scanlan Road.

Two of the daughters, Lillian and Stella, never married and lived in the family home when it was located on Main Street in Houston. In 1937, the sisters clashed with the city when it wanted to cut down their favorite oak tree on the street in front of their home for a road widening project. The sisters were not successful in challenging the city to save the tree and decided to dismantle the mansion and rebuild it on their property in Fort Bend County near the town of Arcola. They called their property Sienna Plantation, after Saint Catherine of Siena, the patron saint of single-women.

There are lots of oak trees along Scanlan Road.

They lived in the mansion until their deaths in 1948 and 1950. Prior to their deaths, the sisters formed the Scanlan Foundation, a trust developed to benefit various Catholic charities. The Catholic Diocese of Houston-Galvestion used the plantation from 1955 to 1967 as a retreat for the Cenacle Sisters.

The property was restored in the early part of the development of the Sienna Plantation community and in 1997 was used as a marketing center. I’m not sure what happened to the property after that but the house does look like it has been recently occupied. The developer, Hillwood Residential, has taken steps to preserve the property by enlisting a group of history-minded volunteers and the Fort Bend County Historical Commission to determine the condition of the house and advise on long term plans.

As for the Scanlan family, they are buried in the Glenwood Cemetery in Houston and their name lives on as roads in the Sienna Plantation development. In addition to Scanlan Road, there is Scanlan Trace which circumnavigates the original development. Cyclists in the area know the route as the Scanlan Shuffle. In Houston, there is the Scanlan Building at the corner of Main and Preston. It was built in 1909 as a memorial to the deceased patriarch of the family and was the first building in Houston to be greater than 10 stories tall (it’s 11).

Note that the Scanlan mansion is private property and there are many no trespassing signs posted.

The front of the mansion. 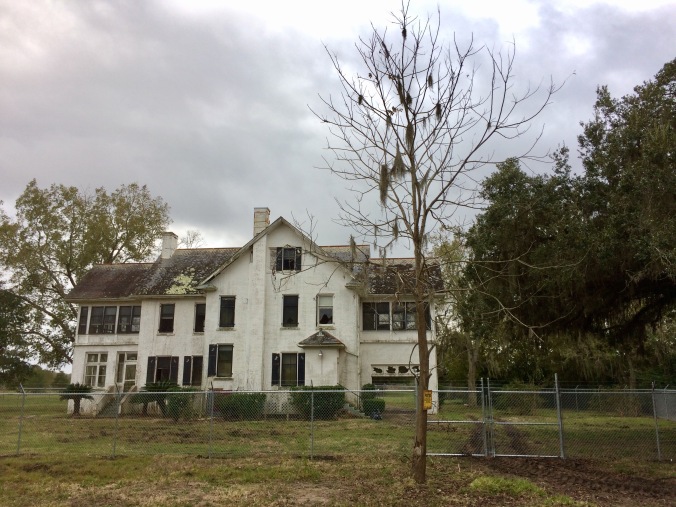 The rear of the mansion.

11 thoughts on “The Scanlan Mansion is GONE!”

All ride better than they look!

The Dude Abides. I'm A Dude AbiKes. I wonder as I wander around Austin on a bicycle.

- The Ramblings of an Island girl -

Because Cycling is Life

Back Yard Gardening - From My Backyard

Dinner conversations can be pretty thought provoking. I thought I'd share some of ours...